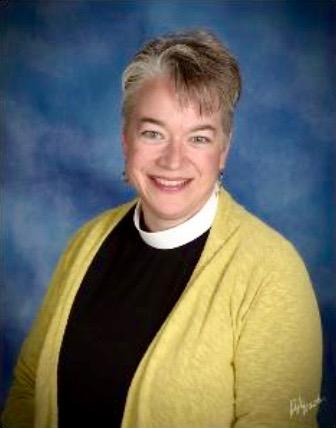 Rev. Fran Gardner-Smith
St. Alban’s and St. George’s Episcopal Church
Antioch, California
The Interfaith Peace Project welcomes Rev. Fran Gardner-Smith as author of July’s Women’s Day reflection.
The Rev. Fran Gardner-Smith was ordained as a priest in the Episcopal Church in 2006. For the past three years, Fran has served as founding Co-Vicar of a four church cluster known collectively as Holy Spirit Church. These include St. Alban’s and St. George’s in Antioch, St. John’s in Clayton, and St. Michael and All Angels in Concord. Previously, Fran served in Northern New Hampshire and the Upper Peninsula of Michigan.
Fran is a graduate of Mount Holyoke College in South Hadley, MA (with a double major in religion and history, plus a Master of Arts in Teaching in Early Childhood Education) and Virginia Theological Seminary in Alexandria, VA.
Fran and her husband David (a retired pastor) were married in 2010. They live in Antioch, CA with their moyen poodle puppy, Jasper. Fran is grateful for the witness and ministry of the Interfaith Peace Project.
We are grateful to Rev. Fran for sharing the sermon she wrote and preached the Sunday following the tragic injuries and deaths among the LGBTQ Community in Orlando, Florida.

This week we pick up the story of Elijah where we left off a few weeks ago. At that time, Elijah and Yahweh were triumphing over the prophets of Baal. Then, Elijah slaughtered those prophets and raised the ire of Queen Jezebel. And while Elijah was able to face down the prophets, he was (apparently and appropriately) very afraid of Queen Jezebel, and fled for his life.

Twice we hear the once confident Elijah say, “I alone am left and they are seeking my life to take it away.”

Elijah’s words echoed in my head this week every time I thought about the acts of violence that have taken place.

I remember many of the mass shootings in our country. Some are known by a name: Columbine. Virginia Tech. Fort Hood. Aurora. Sandy Hook. Charleston. San Bernardino. I was horrified to discover so many more that had faded from memory – perhaps due to the sheer number of mass shootings our country has seen. It turns out that I’d forgotten about: Roseburg, Oregon, Nickel Mines, Pennsylvania, Oak Creek, Wisconsin, Huntsville, Alabama. It turns out that we’ve had forty-six mass shootings in the United States since 1984. Thirty-three have happened since 2000. Take a minute to wrap your head around those numbers. forty-six mass shootings since 1984. Thirty-three since 2000.

Each event is horrifying. Ordinary people are engaging in their everyday lives – going to school, working, praying, shopping, watching a movie, dancing…. And then sudden and unexpected gun violence. Lives are shattered. Innocent people are dead. Many others are wounded physically and psychologically. They will never be the same.

The shooting in Orlando has hit me particularly hard. Some of you know my personal story and others of you may not. While I was still an undergraduate, I came out as a lesbian. For more than 20 years, my relationships were with women. I’ve spent time this week thinking back on those early years after I came out in the 1980s.

I grew up in a small town in Central Massachusetts. It was very conservative and very white. If you were “different” – and in our town, different could mean Protestant, Gay, Jewish, or Black – you were an outcast. In the days before Ellen Degeneres came out on national TV, before Don’t Ask Don’t Tell (which was a horrible law, but at least acknowledged that gay people existed), before Marriage Equity came to Massachusetts (and eventually our country) – places like the Pulse nightclub were places of safety and sanctuary for me and my friends. We could go and be ourselves. We were safe. I danced many a night away in a gay bar in Northampton, Mass where I could be myself.

In my twenties, I often felt afraid and isolated. I feared telling my parents I was gay, lest they disown me. (And, let me add, my fears were wrong.) I feared losing my teaching job if my students’ parents found out who I was. I was a youth minister, and a woman in my church said that “people like me” shouldn’t work with kids and tried to get me fired. Once, walking home after fireworks on the 4th of July, a friend and I were followed by a group of young men in a car. They kept yelling, “[expletive] dykes” and threw beer bottles at us. We looked straight ahead, walked fast. They grew bored with taunting us and drove away. I was terrified.

As our country grew more accepting, and then I fell in love with David and we married, those experiences of fear and isolation faded into the background. But they all came rushing back this week, when I realized that the gunman in Orlando didn’t choose Pulse randomly. He targeted Pulse because he hated gay people and people of color. It was deliberate. Omar Mateen targeted my people.

Perhaps some of you felt this same way after the shooting last year in Charleston. Suddenly, even churches were no longer safe. If an angry, troubled, and racist young man could come into that church under the guise of prayer – and kill nine people – how safe was any church? Any place? How safe is anyone who’s skin is black? I’ve heard stories from some of you about how you have personally experienced racism. Dylan Roof deliberately targeted people who look just like us. It was racist and it was deliberate.

My heart has been broken by the events of this week. I’ve been reading and re-reading our texts for today looking for a good word. Finally, I recognized the solace in them.

First, I found solace right there in Elijah’s story. He’s afraid. Elijah’s fear blinds him to the presence of God. But, in actual fact, Elijah is never alone. In the wilderness, he lays down to die – and wakes to an angel who provides him with food – not once, but twice.

The angel says to Elijah, “Get up and eat, otherwise the journey will be too much for you.”

Hear these stories about angels in our midst this week:

“Get up and eat, otherwise the journey will be too much for you.”

We are not alone. There are angels providing sustenance of every kind all around us.

The other place I found solace this week was in the Gospel. Jesus was in Gentile territory when he encountered a man possessed by demons. We know it was a Gentile area because they kept pigs!

Before his encounter with Jesus, the man was naked and homeless. He was a danger to himself and others, so was kept chained and under guard. He lived among the tombs. Jesus cast out the demons that tormented him. The townspeople found him transformed – sitting at the feet of Jesus, clothed, and in his right mind. Jesus had compassion for this unknown Gentile man and acted to bring healing and wholeness to him.

The love and compassion Jesus felt for that man was not some kind of one-off thing. It’s the same love that Jesus has for each one of us. Every human being – gay or straight, black or white, young or old, Jewish, Christian, Muslim, or whatever – let me repeat that – every human being – is loved and valued by God. We see that repeatedly in the Bible and we see it particularly in the stories we hear today.

The words “I alone am left and they are seeking my life to take it away” are a lie.

I remember how isolated I felt as a 20-something lesbian. I was afraid to speak my truth. I was afraid to tell the people that I loved who I was. In fact, I’d never even told that story about being taunted by drunk men on the Fourth of July before this week.

I’ve heard stories about experiences some of you have had based in racial discrimination. And I’ve heard about how that discrimination has left you feeling alone and isolated. That isolation is a lie.

We are not alone. God loves each of us. God loves me and God loves you. God sends angels to care for us in our darkest hours. God sends Jesus to love us into wholeness with care and compassion.

Perhaps you have had your own dark hours – for whatever reason. Perhaps you have felt alone and isolated. That isolation is a lie. God loves you. And God sends angels to care for you.

I want you to remember the ending of today’s Elijah story. Elijah doesn’t stay in the cave. God sends Elijah to Damascus, to continue the work he has been called to do.

These days, the world can be a sad and scary place. I’ve cried many tears this week. But we can’t allow the darkness to have the final word. You are not alone. You are loved. God created you as you are and God loves you as you are. And, each one of us is God’s best hope for bringing about the kingdom of God. Don’t forget it. Amen.